This is a companion blog my sixth Functional Justin YouTube video which you can find here: https://youtu.be/3GPXEzO14ZE

In the video I talked about the Functor Laws and continued working on the example program that evaluates arithmetic expressions. I use Monad, then Applicative, to show how we can make a Numeric instance for Either, so we can handle errors in a nice functional way.

Since the episode I spent a bit of time cleaning up the code and putting what we already saw (Numeric and Functor) into their own packages. I also went ahead and implemented Applicative and Monad which will be used in the the video and below.

You can find the typeclasses here:

Our Functor type class really only exists to implement the map function, and we already have a map function in the Scala standard library for such things as Options, Lists and Futures. You might wonder why we would go the trouble of making our own abstraction just to write a function that we already had.

The goal of abstractions like Functor is not just to provide useful functions like map, but to provide a principled layer that we can build further abstractions upon. For example we will see that Applicative can be built on top of Functor, Monad on top of Applicative, and this is only possible because Functor behaves in accordance to strict rules that it brought with it from Category Theory.

You can read more about Functors on the Haskell documentation pages:

Another great resource is the famous "red book"…

What this law states is that if we map over some effect with the identity function, then neither the effect nor any value inside it will change.

In the two examples we mapped an Either and a List using the identity function and nothing changed.

If we have two functions, f and g, it doesn't matter if we map over some effect with f first then map over it with g, or we map over it one time with the composition of f and g. Using the either and list from above we can show this the case here.

Note that in Scala pre version 3 if you use a wildcard import _ then you get all everything exposed in that package. That means you get all the implicit instances too. It was a source of confusion for beginners and even experienced Scala programmers to know which file to import and sometimes to know where instances you are using are defined.

To help with that NO implicits are imported with a regular wildcard and instead you must import them with the new given syntax.

If you want you can also import only specific instances. This, in my opinon, will make things a lot simpler and more precise.

One caveat here is that the given wildcard must appear before the underscore wildcard.

Implementing Numeric for Either

The following code implements an arithmetic expression evaluator using the Numeric type class developed in a previous video and adds error handling by using Either. Each step of our evaluator has this signature.

Which means it is a function takes an input environment (our symbol table) as an implicit argument, and returns an Either where the error (or Left) type is EvalError. EvalError represents the different errors our code will handle. It is a sum type implemented as a Scala 3 enum (seen in a previous video).

In previous blogs/videos I showed how we can implement a Numeric instance so we can do arithmetic on many different types, just so long as we create an instance of Numeric to handle them. Now we must implement Numeric for the following type Numeric[Either[EvalError, A]].

The instance signature is

Note I am using the name fmap and fflatMap to make it clear we are not using the standard library implementations here. This is just for clarity but is not a good practise because, for example, you will lose the ability to use for comprehensions.

which means it takes our Either[EvalError, Numeric[A]] and a pure function, which it will apply to the Numeric. Unfortunately we end up with an extra layer of Either! Let's see why… 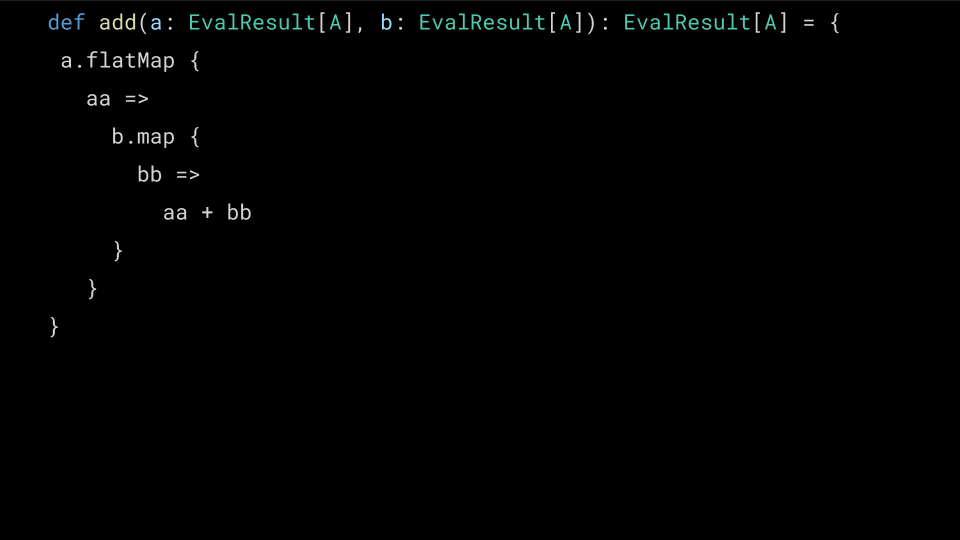 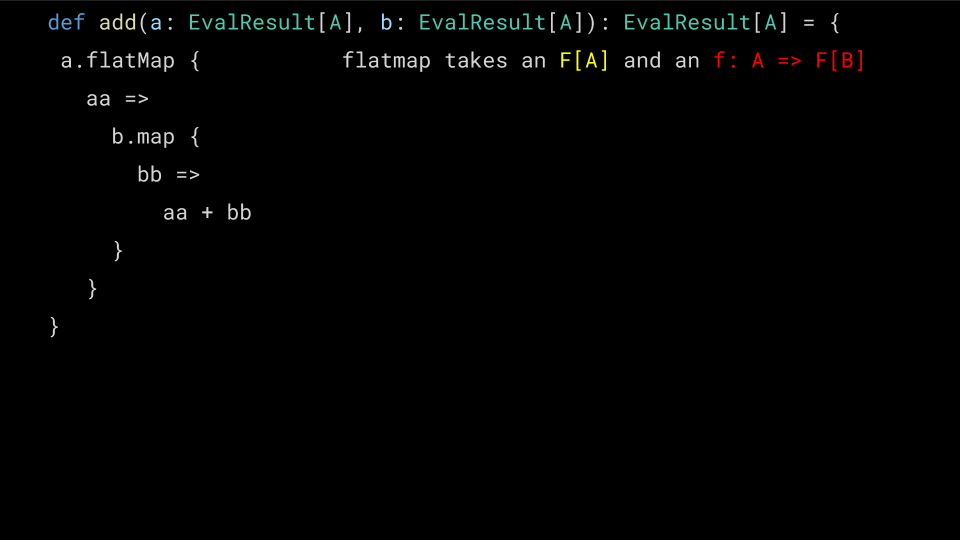 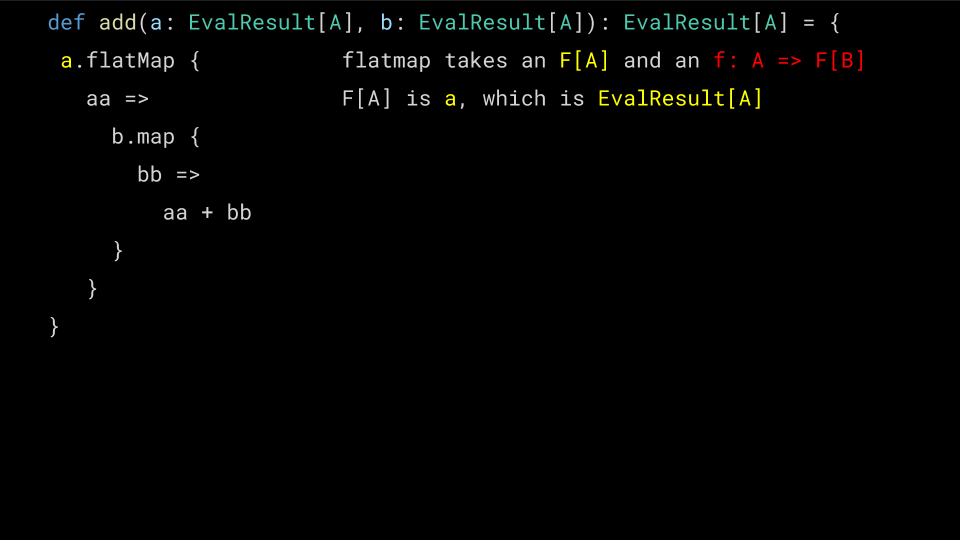 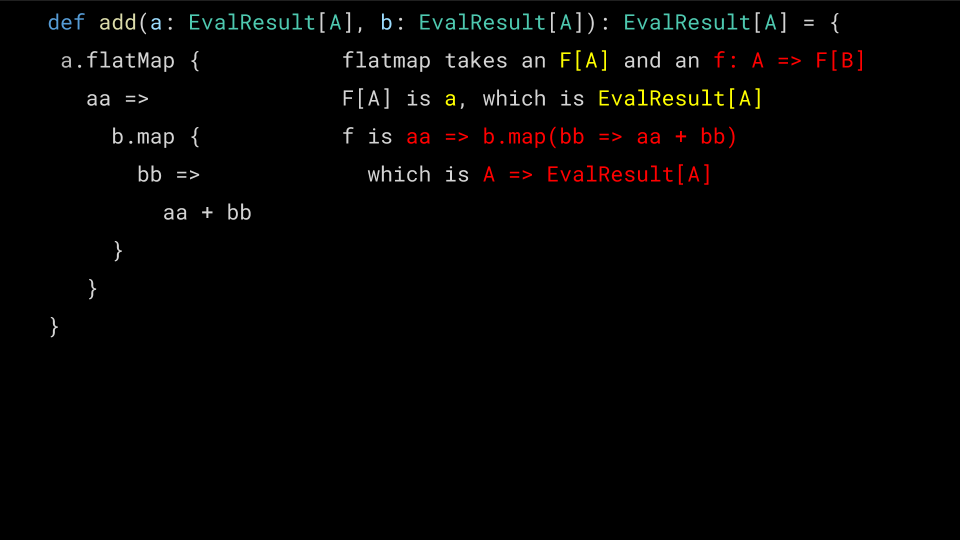 Monad to the rescue

So instead of Functor with its map function, we need Monad and its flatMap which let's us implement all the arithmetic functions in a straightforward manner.

I've implemented Monad in the file above and made it available to the code. The implementation is simple and based on the example given in the Dotty documentation. The main difference is I've also implemented Applicative, since we will use that in a moment, and Monad extends Applicative.

Now each arithmetic operator can be implemented as follows, which achieves our goal of being principled and functional and let's us handle errors at the type level.

Map2 we love you

Unfortunately it's bit verbose. Monad is more powerful than we need in fact. We could use Applicative instead. I will talk more about Monad and Applicative in a later video, but in short you can think of Monads as being good for putting two effects together and flattening the result, whilst Applicative is good for passing multiple effect values as parameters to some pure function.

You can see the Applicative implementation here.

Now, Functor has map, Monad has flatMap and Applicative has its own mapping function called ap. Whilst it's out of scope for right now, the ap mapping function makes it possible to apply two or more effects as parameters to a pure function, which is exactly what we need here. From ap you can derive methods that make this much simpler, map2 for example. Here we use map 2 to take any two input effects and apply the multiply operator to them…

What we have at this point is a nice implementation of Numeric that uses Either's for error handling, which in turn is built on Applicative. Let's see how easy it is to add new errors and capabilities to the expression evaluator.

First we add a new error type DivisionByZero. The next thing we need is for Numeric to have a concept of whether a number is zero or not. Remember that we can implement Numeric for many different types and not all of them represent zero the same way. We can therefore add an isZero predicate to the type class.

Next every instance of Numeric needs an implementation of it, so for exapmle in the Int instance we have the following.

The implementation for Numeric Either let's us write the isZero for any value in an either as long as that value has a numeric instance of its own.

Finally we can implement the division operator for Numeric Either like this.

That's all for now, I hope you enjoyed this post and video. Please contact me using the methods above with any questions, suggestions or corrections!